ATRAC3plus is a proprietary audio compression algorithm developed by Sony. As in the case of its predecessor ATRAC3, ATRAC3plus represents the next generation of the ATRAC codec introduced in 1992 with the MiniDisc. Common use of that codec is in nowel Minidisc players and Portable Playstations made by Sony.

Streams coded with ATRAC3plus are usually stored either in the WAV container (those files have the ".at3" extension though) or in the Sony's proprietary Oma/Omg container. In the case of the WAV container the undocumented GUID:

is used in order to indicate the ATRAC3plus codec.

There is very limited number of software products supporting encoding/decoding of the ATRAC3plus streams; most of them are unfortunately available for Microsoft Windows only. Those are:

ATRAC3plus operates on fixed bitrates only. The following bitrates are offered by the Sony Encoding software:

ATRAC3plus is a hybrid subband/MDCT codec like MP3. The signal is split into 16 subbands using Polyphase Quadrature Filter (further PQF) before MDCT and bit allocation. The sample-frame size is 2048 samples per channel.

After the sine waves extraction the remained signal (residual) will be transformed into frequency domain by a 128-point Modified discrete cosine transform. The resultet MDCT spectrum will be devided into 32 quantization units of unequal width (higher frequencies - wider units). The relationship between QMF bands and quantization units (QU) is shown in the table below:

The flowchart of the ATRAC3plus decoding process is shown below: 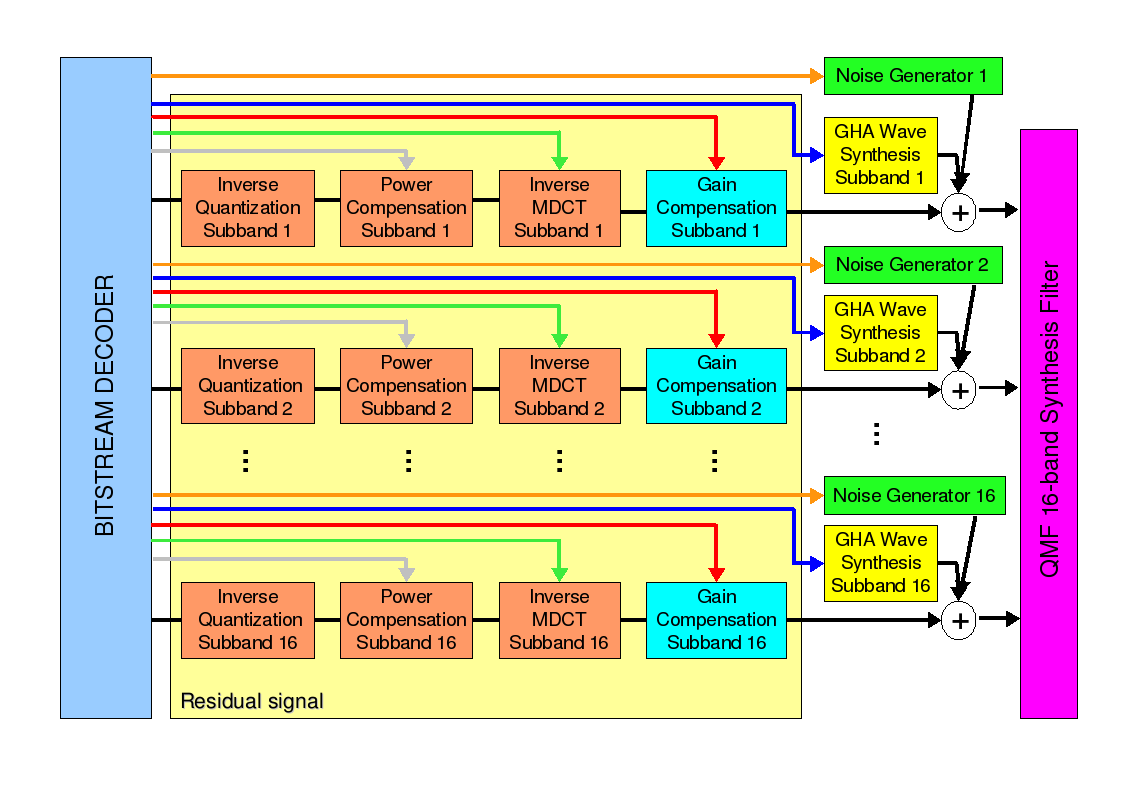 "Bitstream decoder" decodes various sound parameters from supplied frame data. First the residual signal will be decoded by applying inverse quantization, power compensation, inverse MDCT and gain compensation. Then the sine waves will be synthesized according with their parameters such as frequency, amplitude and phase. Then the residual and the synthesized sine waves will be added together. Optionally, some white noise can be added if specified in the bitstream.

This processing will be repeated for each of 16 subbands. Finally the PQF synthesis filter will be applied in order to sum all subbands together and reconstruct the encoded audio signal.

The following techniques are used in order to make the compressed data smaller:

Probably the most interesting part of the ATRAC3plus codec is the Generalized Harmonic Analysis (GHA) - an inharmonic frequency analysis proposed by Norbert Wiener in 1930. The main advantage of that is an excellent frequency resolution that surpasses the short-time Discrete Furier transformation. However it requires huge amount of calculations. Several algorithms to work around that problem were introduced during last 20 years, for example the one proposed by Dr.Hirata.

Coding methods described in this section serve the purpose of representing different bitstream parameters like word-length, scale factor etc. using a smaller number of bits. It will be achieved by exploring and removing redundancy from the signals being encoded. The coding techniques described here are lossless.

ATRAC3plus uses this coding technique widely. There are more than 130 different huffman tables in total for coding bitstream signals. Usually more frequently occuring values will have shorter codes. ATRAC3plus huffman trees are canonical ones. That means those can be stored very compactly by specifying the following parameters:

In my code I'm using the following descriptor in order to specify a canonical huffman table:

For example, the huffman table vlc_tab_index = 3 here will be described as follows:

The 2nd element of the array "num_items" is set to "0" because there is no codeword with the length of 2 bits.

The following C-pseudocode can be used for generating huffman tables from the descriptor described above during decoder initialization:

The array "bits" receives length in bits for each codeword, "codes" receives codeword itself.

Finally, the order of codes need to be specified. A simple remapping table will be used to translate the code index into final code. For the table described above the translation table will look as follows:

ATRAC3plus utilizes various delta-coding schemes in order to remove linear correlation from the signal. It often uses the modular arithmetic as well. The main advantage of this coding is that only the half of the range of the difference values is required. An example: word-length information coefficients in the range 0...7 need to be transmitted compactly. Using delta coding this would require to code difference values in the range -7...+7, also 15 values.

In the case of modular arithmetic the range of the difference values can be reduced to 0...7 by introducing a "wrap-around" so that the final equation looks like this:

Below an example with "wrap around":

Another example without "wrap around":

Further variable-length codes will be used to reduce amount of bits of difference values in accordance with their probability.

The following is a description of the delta-coding methods used in ATRAC3plus:

The 1st coefficient has no delta value associated with it because there is no previous value. It will be coded "as is" using fixed length of 3 bits. The following delta values get a variable-length code from the table val_tab_index = 2 here so the final number of bits to be transmitted will be = 32. Compared to the unpacked version (13 x 3 bits = 39 bits) the coding method described above will yield a bit-reduction of 7 bits (18% smaller).

In a stereo mix the signal of the left channel is often very similar to the signal of the right channel (i.e. there is a high cross-correlation between the channels). In this case the estimated sound parameters like word-length or scale factor will have a high similarity as well. Then coding the differential signal between the channels can lead to a significant bit reduction. Surely at least the one of the channels must be coded independently. Such a channel will be called "master" (it's usually the left channel but ATRAC3plus has the possibility to make the right channel act like a master as well). For the 2nd channel only the difference to master will be coded. The 2nd channel will be called "slave" in this case.

Below an example of such a high-correlated signal:

Coding the difference signal using the table val_tab_index = 0 here will result in another signal 15 bits long. Compared to the unpacked version (13 x 3 bits = 39 bits) that coding method will yield a bit-reduction of 24 bits (62% smaller).

Sometimes coefficients in a signal are very close to each other, so subtracting the minimum value from each coefficient will result in smaller deltas whose can be coded using fewer bits.

As one can see the values in the sequence above are very similar to each other. Let us find minimum and maximum values and then determine the number of delta bits:

Now let us encode the sequence above using shorter deltas:

Sometimes ATRAC3plus have to deal with sequences of numbers (i.e. gain control position information) where all items are known to be in ascending order (i.e. satisfy the following equation: Vn+1 > Vn). Such sequences can be packed without any additional bitstream information by examining previous value (predecessor), calculating magnitude between it and the maximum value and making the decision about number of bits of the next delta value.

Let us return to our sequence. The 2nd value will be coded directly as well using 5 bits because ilog2(31 - 5) = 5. Similar for the 3rd one. No delta coding is applied in that case. The 4th value will be delta-coded using 4 bits:

And so on until we reach the last value = 30. In this case there is only one value that meets our condition Vn+1 > Vn: the value of "31". In this case no delta will be transmitted and the coming value will be calculated just as:

Therefore the resulting sequence will be 27 bits long. Compared to the unpacked version (8 x 5 bits = 40 bits) this packing method will yield a bit-reduction of 13 bits (32% smaller).

One further packing technique used in ATRAC3plus is based on so-called "shape prediction vectors". Encoder decomposes a signal (word-length or scale factor info) into "shape prediction" + residual. Then only the index of the "shape prediction vector" and the huffman-coded residual will be transmitted. The main advantage of this method is when the shape matches the coded signal closely, the residual can be represented very compactly (usually 1-2 bits per value). Moreover, the majority of values of the residual will turn into zeroes, which can be further packed.

Consider the following signal to be encoded:

Let us "quantize" that signal by diving it into 4 * 3 groups and find the averaged value in each group:

Find a "shape table" in the trained set that closely matches our "quantized" version. It will be (for example):

Now select a huffman table that represents the residual above as small as possible. The following huffman tree assigns the shortest code (1 bit) to the most frequently occuring symbol = "0" and 2-bit codes to the others: "1" and "-1":

If a signal contains lots of zeroes, grouping several values together and assigning the "group coded" flag to each group will achieve a significant bit-reduction. Consider the following sequence of numbers to be encoded:

Let us cluster each two values together and assign the "coded" flag (1 bit) to each group:

Thereafter, each "not coded" group requires only one bit to be transmitted indicating that all values in that group are zero. On the other hand, each "coded" group requires one extra bit to be transmitted indicating that at least one value in that group is non-zero. In the case above that overhead is worthwhile because the half of the signal contains zeroes.

ATRAC3plus supports multichannel streams (up to 8 channels). Such streams are encoded in units customary called "channel block"; each block contains max. 2 channels (ie can be MONO or STEREO). For example, taking the channel_id = 3 and looking at the table below we have a stream containing 2 channel blocks: 1 stereo + 1 mono and thus 3 channels. The base codec operates on either MONO or STEREO channel blocks only.

The table below shows the bitstream organization of ATRAC3plus at the top-level. Depends on channel configuration a typical frame may contain more than one channel block. In this case the additional fields channel_block_type and channel_block_data will be included for each block.

There are following channel block types in ATRAC3plus:

ATRAC3plus was designed to provide a high-quality sound compression. Therefore it tries to save as much bits as possible. It uses a new coding scheme for channel blocks compared to ATRAC3: channels in a stereo sound are no more coded separately but rather in one stereo channel block. The bitstream for such a block provides the possibility for both channels to share several sound parameters so that there is no need to transmit the same things twice. Depends on correlation between the channels this can lead to a significant bit reduction and thus improve coding quality.

At the start of each channel block the sound header is located. It contains the following fields:

Word-length coefficient of the trailing quantization units corresponding to the high spectral bands tend to be either 1 (low-precision) or 0 (not coded). Such coefficients will be ommited and one the following modes will be used in order to reconstruct their values during decoding:

To calculate the split point from split_point_delta do the following:

The following C-pseudocode shows how to parse a bitstream according with the table above:

The following C-pseudocode shows how to reconstruct trimmed word-length coefficients according with the table above:

The word-length information for each channel will be coded as follows:

The coding_mode parameter may be interpreted differently depends on the channel number. The following pseudocode examples explain the coding modes in detail:

All coefficients will be directly coded as follows:

The following C-pseudocode summarizes all above:

The weights below will be added to the decoded word-length coefficients. The tables are organized as follows:

PLEASE NOTE: delta values indicated in the tables below will be added using modular arithmetic as described here, so in the case of "wrap around" the value of "7" will be treated as "-1", the value of "6" = "-2" and so on.