Difference between revisions of "Sorenson Video 1"

This document is based on the document 'Description of the Sorenson Vector Quantizer #1 (SVQ1) Video Codec by Mike Melanson and Ewald Snel found at http://multimedia.cx/svq1-format.txt.

Sorenson Vector Quantizer #1 is identified by the four-character code SVQ1. This FOURCC will be used throughout this document to identify the codec.

SVQ1 is primarily used to encode video in Quicktime files. The format was commonly seen from 1998-2002 before its successor, SVQ3 (which is based on completely different coding concepts), was rolled out. The algorithm uses hierarchical adaptive multistage vector quantization with mean removal and motion compensation in order to achieve its compression.

The SVQ1 patent listed in the references is a good source for understanding both the encoding and decoding process. This document focuses on principles necessary to implement a SVQ1 decoder.

This document assumes familiarity with certain general and video-specific coding concepts such as Huffman (a.k.a. variable length) coding, YUV colorspaces, inter/intraframe coding, and motion compensation. A familiarity with vector quantization is useful, but this document will explain what you need to know about the particular flavor of VQ that SVQ1 uses.

SVQ1 operates on vectors (think blocks) of pixels. At the highest level, the algorithm breaks an image into 16x16 blocks of pixels, or 256-pixel vectors. For each vector, the encoder performs a motion search (if the frame is not a keyframe), mean removal, and multi-stage codebook search through a series of pre-defined codebooks. If the encoder finds a good match for the vector after one or more of these operations, then it outputs the proper bit coding for that vector. Otherwise, the 16x16 block is broken in half into 2 16x8 blocks (128-pixel vectors) and the same operation is repeated (minus the motion search, which only operates on the 16x16 vector level). SVQ1 operates at 6 block sizes:

If the encoder has to break a 4x4 block into 2 4x2 blocks, the block cannot be subdivided further and must be encoded as is using mean removal and a combination of vector codebooks.

SVQ1 uses YUV 4:1:0 planar data as its native colorspace. This is also known as YUV9. Each 4x4 block of pixels is represented by one Y sample per pixel, but only 1 U sample and 1 V sample for the entire block.

A single SVQ1 chunk has the following high-level organization:

Each SVQ1 chunk begins with a header which can be a variable number of bits in length. The header bits have the following meaning:

True, many of the header fields are unknown. But the stream can be decoded just fine with the known header fields. The picture type has the following 4 possible values:

A SVQ1 chunk can have a message string embedded inside the chunk header. If (frame code ^ 0x10 > 0x50), follow this algorithm to decoder the string:

The specific details of the checksum coding are not all known.

For the purposes of this description, each block size is assigned a level:

For each of the 3 planes in an intraframe, iterate through each 16x16 block, which are each level 5 blocks, from left->right, top->bottom.

If the level 5 block was subdivided into 2 level 4 halves, process each half using the following algorithm:

If any level 3 blocks were inserted into the processing queue as a result of level 4 block subdivisions, process each level 3 block in order using this algorithm:

By now, you should be recognizing a pattern, e.g.:

Where does it end? The function requires a base case where the processing can go no further. In this algorithm, blocks cannot be subdivided beyond level 0 (4x2 samples):

The SVQ1 algorithm processes each level of this tree in order from 5 down to 0. In the above example, the decoder would unpack the information for the level 5 block, then each level 4 block, then each level 3 block, before moving onto the next level 5 block. This is known as a breadth-first tree traversal, as opposed to a depth-first traversal which would process each of the 2 halves of a block subdivision before moving onto the next block in the same level. The following abstract information would be used to represent the level 5 block in the above example:

Note that if the processing tree subdivides to level 0, there will be no 0 in front of the mean and multistage information for the block since the block can not be subdivided further.

As an example of the processing steps needed to reconstruct an intraframe block, consider an example where the decoder has recursed down to the base case of level 0. Fetch a VLC from the bitstream using the intra multistage VQ table. For example, the retrieved VLC is 2 (from a range of -1..6). This indicates mean removal plus 2 stages of VQ. Extract a VLC from the bitstream using the intra mean removal VLC table. For this example, the removed mean is 61. Extract 8 more bits from the bitstream, 4 for each of the VQ stages. The first 4 bits indicate the stage 1 codebook and the second 4 bits indicate the stage 2 codebook. For this example, stage 1 = 4 and stage 2 = 14.

First, add the mean to each element of the base vector:

Then, apply the stage 1 codebook:

Then, apply the stage 2 codebook:

This is the final 4x2 block of samples that will go into the output.

A note about wraparound/clipping/clamping/saturation, etc.: At each stage of the addition or subtraction, the result of saturated to an unsigned byte range, 0..255.

SVQ1 motion compensation operates in two modes. One mode operates on an entire 16x16 block (INTER mode). The second mode splits a block into four 8x8 subblocks and each subblock has a motion vector (INTER_4MV mode). The motion vectors always operate on a half-pixel grid, similar to MPEG-2.

In the case of INTER_4MV mode, each of the 4 8x8 blocks gets a different motion vector. Follow this table as an example:

Once the motion vector is fully decoded and the reference 16x16 block is copied from the appropriate block from the previous frame to the current block in the current frame, repeat the same familiar intraframe decoding process. The only difference is that you will add the codebook vectors and removed mean to the interframe block rather than to a block of zero samples.

The following is a graphical depiction on the motion vector prediction logic used in SVQ1: 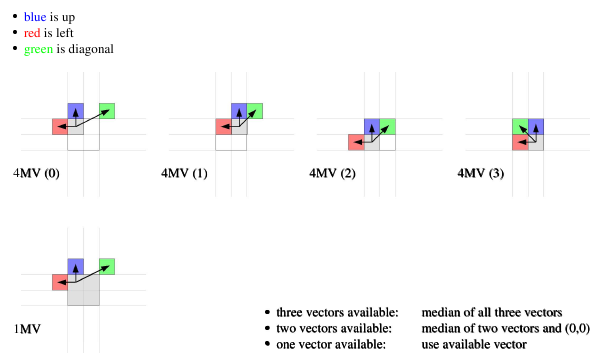 This is a listing of all of the data tables necessary to encode/decode SVQ1 data.

These tables describe how a block is coded. * The values in these tables range from -1..6:

These tables contain a large number of signed bytes that are applied to vector levels to reconstruct vectors for a final output frame.