Difference between revisions of "MTV"

The MTV Video format was created to allow video playback capabilities on inexpensive Chinese-made portable MP3 players without increasing the cost of those players with the license royalties (and more processor power). These Chinese MP4/MTV Player (sold as "MP4 Player" or "PMP", for Personal Media Player) are flash based digital audio players, mostly manufactured in China, capable of viewing images, videos, and text files. Although commonly called MP4 players, they are unable to play true MP4 (MPEG-4 AVC H.264) formated videos and are limited to the proprietary file formats such as MTV, AMV, DMV, MPV, ATV, and ACT. They are a kind of the S1 MP3 Player. This is beginning to change however, as more and more top-branded portable players are starting to support true MP4 (MPEG-4 AVC H.264) video files.

The format operates by displaying a series of raw uncompressed rgb565/555 image frames while playing MPEG1 Audio Layer 3 (AKA MP3) audio but as the files are of low resolution and frame rate, sizes are comparable to MPEG-1 or MPEG-2. (in a bytes-per-minute sense). Encoding and decoding are less processor-intensive than other contemporary formats (i.e. faster to encode on, say, desktop computer, and less hard on the batteries of the portable device), as in fact very little "encoding" is actually done

The MTV format consists of a 512 byte file header, followed by alternating audio and image blocks. Audio frame data is not necesarily aligned on blocks boundaries and each one off them has from 1 to n subblocks of 512 bytes each with 'n' remaining constant through the entire file/stream, the first 12 bytes of each audio subblock is padding data and is allways set to 0. Image data, on the other side, is perfectly contained on each image data block, each one representing an entire frame.

During decoding of the video stream, the audio frames are passed to the MP3 hardware decoder, while the memory pointer of the display hardware is simply adjusted to the next raw image within the video stream. While this concept does not require additional * hardware for the decoding process, it leads to huge memory requirements as no compression is applied to the image information. For this reason the storage capacity of an MP4 player is effectively much less than that of a player that decompresses files on the fly. 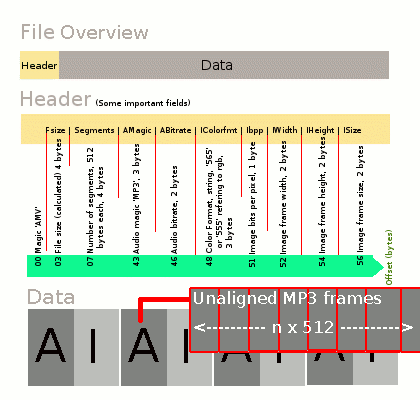 Software available (to date April 2nd 2006) currently give screen sizes of 94x64, 128x96 and 128x128, typically set to frame rates of 8, 12 and 16 frames per second (described as "low","medium" and "high"), which fits reasonably well on 1.2 to 1.5+ inch screens. By editing configuration files the range of frame rates handled by the encoder can be expanded to 8-24 (in 1fps increments), though using alternate framerates may cause problems if the player is not designed for those.