Dolby E is a codec from Dolby Laboratories that is used to transport up to 8 channels of audio across AES-3 cabling (AES-3 is the professional version of SPDIF). It is carried in a SMPTE-337M data burst. Dolby E also carries metadata such as downmixing information which is intended to be passed through to the final distribution encoder.

Dolby E is designed to match up with video frames to allow for easy cutting. Guard Bands are also present at the beginning and the end of the frame to reduce the risk of bad splicing causing problems.

The LSB of the startcode signals the presence of a Bitstream Key. The Bitstream Key is mandatory in 16-bit mode.

Certain parts of the bitstream seem to be XOR ciphered. The key is always the first word of the section that is XORed.

Each audio subsegment, metadata section and the metering section is CRCed using the AV_CRC_16_ANSI in libavutil. (TODO: describe 20-bit mode because it's slightly different)

Dolby E contains "Professional Metadata", which include SMPTE timecodes along with how the downstream encoder should be configured and "Consumer metadata", which is for passing onto AC-3 and Dolby Pulse bitstreams to the viewer. 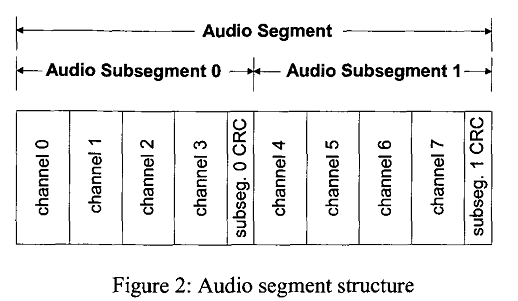 There's always an even number of channels so the split is trivial.

There seem to be only 2 exponent strategies. Bit allocation is similar to AC-3. 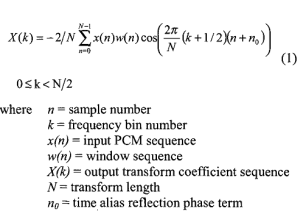 There is also metering information available at the end of the frame. (TODO: describe further)

A free trial of a software Dolby E encoder and decoder that supports encoding of 16-bit and 20-bit modes and decoding of 16-bit, 20-bit and possibly 24-bit is available from http://www.neyrinck.com. However it requires Pace iLok to run, which features kernel level anti-debugging.

Each function name is followed by a function ID number. These take the take the form: DD_XXXXD_YYYY for decoding and DD_XXXXE_YYYY for encoding